FIFA and FIFPro have today concluded a wide-ranging six-year cooperation agreement to strengthen relationships between the two organisations and improve the governance of professional football worldwide.

Additionally, an accord has been reached between FIFA, FIFPro, the European Club Association and the World Leagues Forum under the umbrella of FIFA’s newly formed Football Stakeholders Committee, which includes confederations, member associations and professional football stakeholders. The new rules will streamline dispute resolution between players and clubs, particularly for decisions in cases of overdue payables. The changes will also introduce a new provision to avoid the abusive conduct of parties, such as players being forced to train alone. This agreement followed 18 months of negotiations between FIFA and the game’s key stakeholders.

The transfer system will also be further improved as FIFA’s Football Stakeholders Committee has agreed to establish a task force to study and conduct a broader review of the transfer system. Joint initiatives include the continued rollout of club licensing, establishment of national dispute resolution chambers, and exploring minimum contract requirements with all stakeholders at global level. The health and safety of the players will be addressed, in particular in relation to the international match calendar, which is set to be discussed with all stakeholders. Furthermore, FIFA and FIFPro are committed to respecting internationally recognised human rights, including as they apply to professional football, as well as promoting equality and the interests of female players, the growth of professional women’s football, and women in football.

As a consequence of these commitments and the implementation of today’s agreement, FIFPro will withdraw the complaint against FIFA lodged with the European Commission in September 2015.

“Today marks an important milestone in the improvement of the global governance of professional football,” said FIFA President Gianni Infantino. “I have witnessed unprecedented cooperation between FIFA, FIFPro, the European Club Association and the World League Forum. These were complicated negotiations with the game’s key stakeholders and each one has made some compromises but at the end of the day, this agreement is beneficial for all and the ultimate winner is football. I’m looking forward to seeing the same collaborative approach for the discussions that will start now concerning a broader review of the transfer system. All parties – member associations, confederations, players, clubs and leagues – have an important role to play in this process.”

“FIFPro is pleased with the new spirit of cooperation shown by FIFA and its willingness to listen to the concerns of players,” said FIFPro President Philippe Piat. “This mutual understanding has helped set in motion the biggest changes to football transfer rules since 2001. While clubs in the richest leagues invariably treat players well, there are other leagues in which the employment rights of footballers are routinely ignored. These rule changes will help protect the 60,000 players FIFPro represents against unfair treatment. FIFPro is also pleased that the other key football stakeholders share our view to improve the transfer system in the interests of protecting the health of the game. We look forward to working together on this in the coming weeks.” 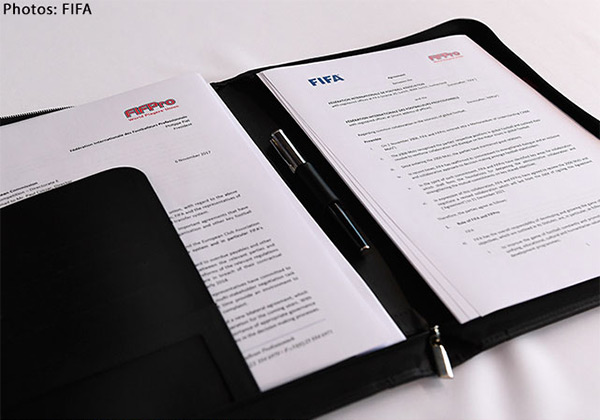