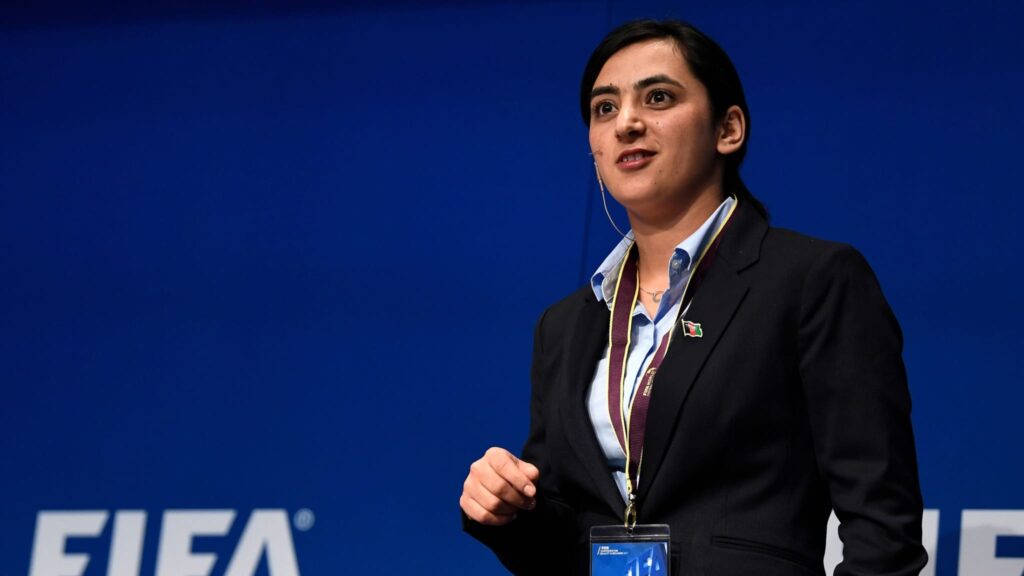 “My power is my voice but international governments have real power,” says Khalida Popal, the former Afghanistan women’s team captain. In the wake of the Taliban’s seizure of power last Sunday Popal and her former international teammates and coaching staff have called for the sporting community to join them in “being a voice for the voiceless women of Afghanistan”.

They want to secure “protection and support” for the hugely at-risk athletes who have defied the Taliban’s interpretation of sharia law just by stepping on to a pitch and using their voices to advocate for the rights of women to play sport. Popal lives in Denmark after she was forced to flee her home country in 2011 in fear for her life because of her role in establishing the national team. She played a central role in the 2018 exposure of abuse suffered by women’s national team players at the hands of Keramuudin Karim, then president of the Afghanistan football federation, that forced Fifa to investigate and subsequently ban him from office.

Khalida Popal (centre) training in south London in 2018
Ex-Afghanistan women’s captain tells footballers: burn kits and delete photos
Read more
Now, after years of elevating the voices and profiles of Afghanistan’s female footballers, Popal is advising them to burn their national team shirts and remove all images and references to them being involved in football from social media to attempt to avoid repercussions for their activism through sport.

Popal says: “For so long I have been fighting to bring visibility to women of Afghanistan and to encourage women of Afghanistan to use their voices. Now I’m telling them to silence that voice, to not talk, to not meet people, to take everything down, to remove their identities. That is very painful.

“It is so painful for me to use these words, telling them that the jersey they have earned, their national identity, has to go – I remember the day that we first wore the national jersey. I can’t describe it – it was maybe a bigger feeling than winning a World Cup would be to many other countries. To be able to wear and earn that national team shirt of the country after such a long time and such a long fight was the most beautiful moment in my life. We were happy and proud. We felt like winners. And now I’m having to tell girls to burn their jerseys and remove their photos?”

The former head coach of the women’s national team, former USA international Kelly Lindsey, echoes Popal in calling on the world to help these women and girls: “The international sporting community has asked them to stand up for their rights. We’ve told them it’s the right thing to do. We have a responsibility as sportspeople to make sure they’re safe now. They are an important part of the journey for all women’s equality throughout the world – if they can do it in Afghanistan they can do it anywhere. Sport’s governing bodies – boxing, taekwondo, football, all of them – need to take responsibility.

“And who am I to say that my girls are more important than this female journalist or this activist? Get them all out.”

Claims that the Taliban have softened their approach are hugely concerning to Popal, who had her right to an education taken away in the 1990s, saw her mother’s right to work taken away and her father beaten for working with the government.

“It’s traumatising for my generation to see history repeating itself,” she says. “This time it comes with added revenge. They say they follow sharia law but under their previous regime we have experienced what type of democracy they want for women.”

Human Rights Watch has similarly urged caution and said the Taliban should be judged “on their track record, not their current comments that they will allow women to work and participate in society”.

Minky Worden, the director of global initiatives for the organisation, which is working on documenting the full range of abuses and protection for all civilians, warned that female athletes and their families but also their trainers, referees, team doctors, female federation officials and coaches are “at special risk of persecution or retaliation from the Taliban precisely because they were encouraged not just to be athletes, but also high-profile icons and role models for women’s rights and gender equality.

“Female athletes have been encouraged by the international community and sports federations to use their platforms of being top national athletes in Afghanistan to promote women’s rights – but now they are more exposed and could be endangered for this profile.

“Female Afghan athletes have also been featured winning scholarships and doing national interviews about topics like health and education for girls, all of which is now likely to be verboten.”

Worden urges Fifa and the International Olympic Committee to wield their “huge soft power” to help protect women: “It is likely that, at some point, the Taliban will want to participate in international sport in some way, whether football or the Olympics, and that could serve as a pressure point to protect women now and in the future.”

A Fifa spokesperson called the situation faced by female footballers in Afghanistan “very worrying” and said it was monitoring it closely and would offer support where it can: “It is clear that the situation on the ground is moving very quickly. In this respect, we are in contact with the Afghanistan Football Federation, and other stakeholders, and will continue to monitor the local situation and to offer our support where possible in the weeks and months to come.”

Lindsey is fearful that international governments and sporting bodies do not realise the extent to which women playing sport is a form of action and protest.

“Just playing and participating in sports is a violation of sharia law,” she says. “Even one time. If the law is strict, that means death of execution. Every time our players went to the pitch there were stories of being spat on and of the stoning, or the terrible comments. They’ve been living this for 20 years. If that was acceptable under a so-called democracy, what’s it going to be like now?”