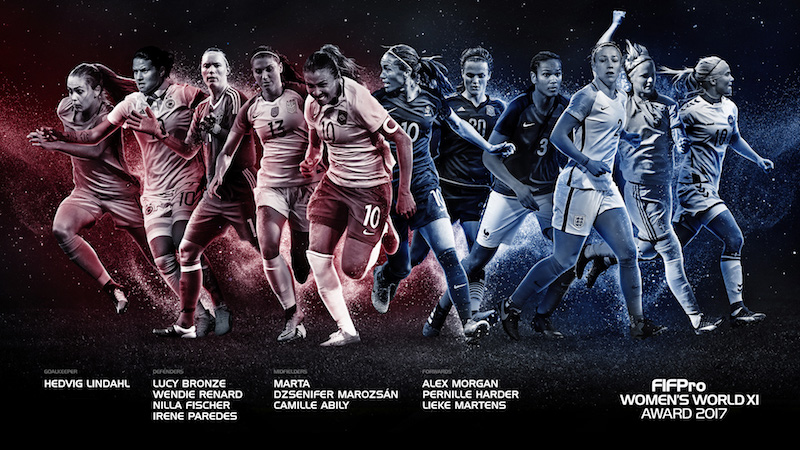 Alex Morgan was also a member of the Olympique Lyonnais team that won last season’s triple, while playing on loan from Orlando Pride.

“It’s always exciting to be considered as one of the top players in the world,”Morgan told FIFPro. “For women’s football to have our own World XI is incredible. It helps promote the women’s game. It helps female footballers recognize the talent among their peers and I’m really happy to encourage and be a part of that.”

“It is a huge honour,”Lieke Martens told FIFPro. “I am a little surprised that I received most votes of all players. I like it, but I know that there are so many very good players like Pernille Harder, Eugenie le Sommer, Ada Hegerberg and many others. I played an important role in the success of the Dutch national team and now people know that I can play very well.”

More than 4,100 female first-division footballers in 45 countries voted for the World XI based on 2017 performances.

It is the third time that FIFPro has organized this unique poll, in which footballers select one goalkeeper, four defenders, three midfielders and three attackers.

Wendie Renard is the only player voted in all three World XI’s.

Next to Renard, four players kept their spot in the World XI: Nilla Fischer, Dzsenifer Marozsan, Marta and Alex Morgan.

Lieke Martens received the most votes: 1,251 players selected her in their World XI. Lucy Bronze was second, followed by Wendie Renard.

Three players were in a close battle for the third midfielder’s position. Marta clinched the award, beating Carli Lloyd and Victoria Losada by four and seven votes respectively.

For the third consecutive year Olympique Lyonnais is the club with most World XI players. Orlando Pride (Marta and Morgan) and VfL Wolfsburg (Fischer and Harder) both have two.

The USA has won 9 World XI places in the first three years, followed by France (7) and Germany (5).

Five of the team are currently at clubs in the French league.