Philippe Piat: “We don’t have the right to let people down!”

Only days before completing his term as FIFPro President, Philippe Piat agreed to look back on his two years in office. In a long interview, the self-described “man of action” surveyed the accomplishments of the past with pride but remained level-headed about the work to come and the union’s responsibilities: “Our greatest job, these next few years, will be to avoid disappointing those who trusted us.”

“Philippe, the time for a look back has already come…
Already, yes, because I didn’t see the time go by. It’s not a cliché but an objective reality when you’ve been caught up in a kind of storm these last few years, as I have been and as all of FIFPro’s personnel and collaborators have been.

Not that you would complain about that.
Certainly not. We spent many years working for FIFPro to be recognized. But since we have finally acquired the legitimate rights that we had been demanding, we now also have obligations. We wanted to be at the very heart of the system, to be present everywhere, to give our opinion, which is the players’ opinion, on all matters relating in any way to professional football players’ present and future. And we obtained what we wanted, perhaps without being fully prepared for it. We have had to adapt in order to bear up, to respond to the ever more numerous requests. It hasn’t always been easy, especially in the beginning, but in the end we have been able to fulfill our obligations.
“An ally like Platini, that’s something!”
Was that important?
What wouldn’t we have heard if, by chance, we had evaded our responsibilities? Demands are at the heart of a union man’s daily work, but once the goal has been achieved it is just as important to be able to be constructive for the process to truly kick in or for things to go faster still. I am proud to know that FIFPro has perfectly played its part for the past two years, and that this has caused it to be recognized, respected, and sometimes even feared. Our competence is acknowledged, our analysis is frequently asked for and I can’t imagine that tomorrow we could go backward.
The agreement signed with FIFA in Barcelona, in November 2006, was the highlight of your term.
Quite obviously, but I am equally proud of the agreement that Michel Platini, President of UEFA, and myself, in my capacity as future President of FIFPro’s European division, signed last October in Brussels. Whether they are global or European, these agreements inherently show that players have been acknowledged by the administrative authorities. And it didn’t come easily, believe me! And it isn’t at all surprising that Michel Platini, after being the player that he was, was directly involved in this radical change. It was he, while serving as an advisor to the President of FIFA, Joseph Blatter, who worked on bringing together the players and the international federation. It was he again, a few years later and after donning the suit of the UEFA President, who wished for the agreement between the European federation and our union to be signed as quickly as possible. And it was still he who called for the creation of a European division of FIFPro so as to be able to deal with it directly, to intensify the conversation and increase exchanges. Having an ally like him, that’s something… 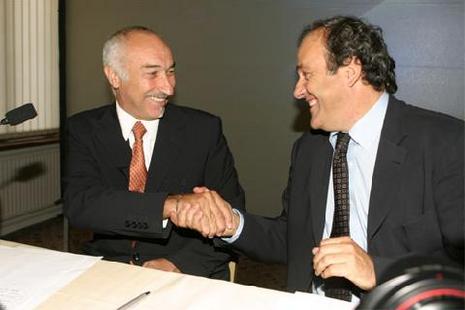 You spoke of a radical change…
Prior to 2001, the players had no voice within FIFA. We were not recognized for what we are, which is the actors of football, though we are not alone in this. We didn’t count. Thankfully, that time is gone. We are members of the strategic councils of FIFA and UEFA, and we are invited to all the colloquiums and seminars relating to football – which makes it difficult to get our datebooks organized.
The players are even listened to beyond the world of football.
It is true that we are working a lot with the European Commission on topics as vast as the social dialogue, doping or racism. All the discussions we have on these matters serve the players’ interests. European ones, of course, but all the others too by a sort of ricochet effect.
“Social dialogue is one of the primordial elements of professional football’s judicial stability over the next ten years.”
Social dialogue, for instance… (he interrupts)
What we are doing, on this topic, with the help of the European Commission is extraordinary and in fact could not go any other way.
Why not?
Because for me this is one of the primordial elements of professional football’s judicial stability over the next ten years.
We’ve moved far away from the field of play.
On the contrary, everything brings us back to it. In the same way, our action on football players’ behalf is not simply to increase such-and-such category of players’ social statute or salary. Everything is linked, everything goes hand-in-hand…
For instance…
The set-up of national paritary committees to resolve disputes between players and their employers. Wherever there is a contractual relationship between a football player and a club, FIFA now obligates – and this is in our memorandum of understanding – all parties to gather around a table to try to find a solution to eventual disputes. This means players will have to organize, to unionize and to join, we hope, FIFPro’s domain. But the most important thing, clearly, is that they be recognized by the executives, that they be owners of the clubs, members of professional leagues or federations. Similarly, the creation of minimum contractual conditions is a huge step forward whose importance has perhaps not been felt by players in western Europe but which has started making people happy in former Eastern bloc countries.
You truly think that FIFPro’s authority is now fully felt.
I would simply remind any doubters that, for instance, no change to FIFA’s rules relating to transfers is possible without our agreement. That isn’t nothing. Also, we are now divided into continental divisions to better answer the needs and better address the realities of each continent (1). In this regard we have modeled our organization on FIFA’s and the first important step forward, for the Europeans, has been the signature of the agreement with UEFA that I mentioned earlier.
Without any false modesty, the acceleration of these last two years has been extraordinary.
Even though I always worked within FIFPro without any real career objectives, it seemed to me, two years ago, that I could be useful. And I wasn’t alone, since others encouraged me to cross the Rubicon. It was therefore natural when I took over from Gordon Taylor.
“It is the players’ judgment that matters, it is their confidence which gives us strength!”
You were the man for the job.
I already had perfect knowledge of the situation, I had been a part of all the battles with the European Commission, so it seemed to me that I was the best armed. But I still had to live up to the responsibilities that were handed over to me. The contacts and friendships I made over the years, the knowledge and political experience I’d acquired, allowed me to find my spot atop the hierarchy, with the help and support, it must be noted, of Theo van Seggelen, the permanent Secretary General, and his whole team who I thank for their help, support and professionalism. 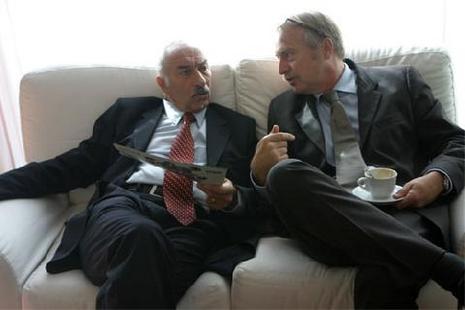 You imposed your own style.
I fully invested myself in my mission and did what I had to in order to carry it out as I intended. I am a man of action, of challenges. I have a direct style. With me, FIFPro’s positions are quickly made clear because I am not a rhetorician, which doesn’t mean I am not a proponent of dialogue and consensus. But there is a time for everything and some fights need to be fought, need to be won no matter what means are used to do so. Forty years as a union man (2) have taught me how much room to give fighting or diplomacy in any given situation.
In other words?
We must never forget that we serve the players. From the Chilean player to his Ukrainian, South African, American or Italian counterparts. It is their judgment that matters, it is their confidence that gives us strength. Nothing must distract us from this.
Do you have the feeling that the 42 member nations of FIFPro have changed their outlook, these last two years?
I have indeed noticed a change in the various national unions’ appreciation of the “mothership”, as of my own self, actually. Within FIFPro’s board I have always had a tough, aggressive style and I can believe it wasn’t to everyone’s taste. But the results we’ve obtained and the advances that have marked my presidency have obviously changed the way people see the president and the international union. The shifting of gears has been appreciated because it has served everyone’s interests.
“FIFPro today is more unionized, more combative, but most importantly has obtained far more convincing results.”
FIFPro has changed its image, reframed its actions.
FIFPro is more unionized, more combative today than yesterday, but most importantly has obtained far more convincing results.
Isn’t it frustrating to be relinquishing the presidency so quickly?
Much remains to be done, certainly. But the fact that I am moving from this presidency to that of the European division diminishes my frustration. The Old Continent is at the origin of a certain amount of rules and actions that influence the entire planet, notably because of the existing interpenetration between FIFA and UEFA. I might have been frustrated without this election to head up the European division. But I know I will be able to continue serving the cause of football players, including the French ones. It must be understood that if our actions on the international level serve one of the 41 other member nations, then they also and inevitably serve the UNFP, which is affiliated to FIFPro.
What do you wish for Gerardo Movilla, your designated successor?
To carry on our actions and, to do so, to be vigilant and to know that nothing is ever set in stone, nothing can be taken for granted. Though FIFPro has won, these last few years, some important victories, our work is far from done. We must keep up our work, without respite, and keep in mind only the welfare of professional football players for they are, I will say it again, our only judges.
How do you see FIFPro’s future?
The last two years have finalized, via the previously mentioned agreements with FIFA and UEFA and discussions with the European Commission, our union’s recognition. This process had started, if it needs to be restated, with what became the Bosman ruling since we supported the Belgian’s pursuit from the very beginning. So it has taken nearly fifteen years for us to get here and now, as I said earlier, we must answer any and all calls. And though I am merely an elected official, my datebook ended up “exploding” under the increasing deluge of solicitations. Since we cannot fail to meet our obligations, our greatest job, these next few years, will be to avoid disappointing those who trusted us: the players, of course, and all those among the executives who believed in our ability to meet the challenges we set our for ourselves.
As is already happening, FIFPro will have to restructure itself.
We must keep developing our own house, assist the emergence of unions in Africa, encourage the positive action under way in South America or eastern Europe, not neglect Asia and help western Europe face up to the rise of “business before all”, a fight in which, to our great fortune, Michel Platini is at our side.”
Interview conducted by Stéphane Saint-Raymond

Lucy Staniforth: “It’s important to open up about how you’re feeling”