On Friday 1 October 2010, Lionel Messi, the best footballer in the world, gave the starting signal for the new election of the FIFA / FIFPro World XI. The Barcelona forward was the first player to fill in his ballot paper at the Juan Gamper training complex. Many thousands of fellow players will follow his example in the coming weeks.

It has now become a FIFPro tradition for the World Player of the Year from the previous year to cast the first vote for the new edition of the FIFA / FIFPro World XI and this year is no different.

Messi was honoured as the world’s best during the FIFA World Player of the Year Gala held in Zurich in December 2009. The Argentine player was also asked to take the spotlight with ten of his colleagues, who were all chosen in the FIFA / FIFPro World XI. It was a memorable occasion as it represented the first time in football history that the eleven best players on the planet had come together on the same stage.

After casting his vote, Messi said that it was the fact that the players themselves choose the World XI which made his selection extra special: ‘Being chosen by my fellow players means a great deal to me. They know better than anyone what you have to do for it and what you have to abstain from in order to reach the top and stay there. It is a great thing that FIFPro has done in giving the players the chance to vote themselves.’

FIFPro is organising the selection of the World XI for the sixth time this year. The world players’ union last week sent out approximately 55,000 ballot papers to professional footballers on every continent: from Australia to South Africa, from Finland to Costs Rica and from Russia to Argentina. Following Messi’s example, the world’s players will put together their favourite team consisting of 1 goalkeeper, 4 defenders, 3 midfielders and 3 attackers. 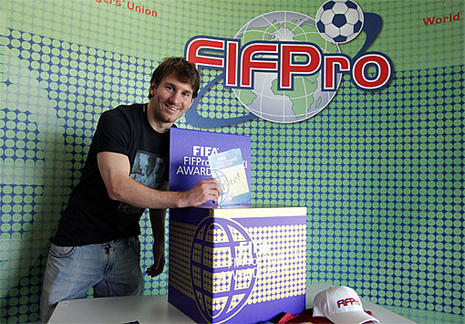 Just like last year, the World XI will be announced in collaboration with FIFA at the FIFA gala which this year will bear the name FIFA Ballon d’Or for the first time. The gala, which will be held on 10th January 2011 in Zurich, will see the 11 players of the World XI receive their FIFA / FIFPro World XI Award.

Until then, FIFPro will report regularly on the elections and the players who are casting their votes throughout the world. FIFPro will reveal which 55 players have made it through to the World XI shortlist in mid-November.

Also the Swiss Players will give their votes. SAFP President Dr. Lucien W. Valloni: “We will provide the players in Switzerland in the comming days with all FIFA FIFPro World XI voting forms and we are sure that the players themselves are the best jury as it is the case in the ongoing voting procedure for the Swiss Golden Player Award for the best players of the Saison 2009/2010.”

For more news, statistics and background information about the FIFA / FIFPro World XI and the elections, please visit the special World XI website.